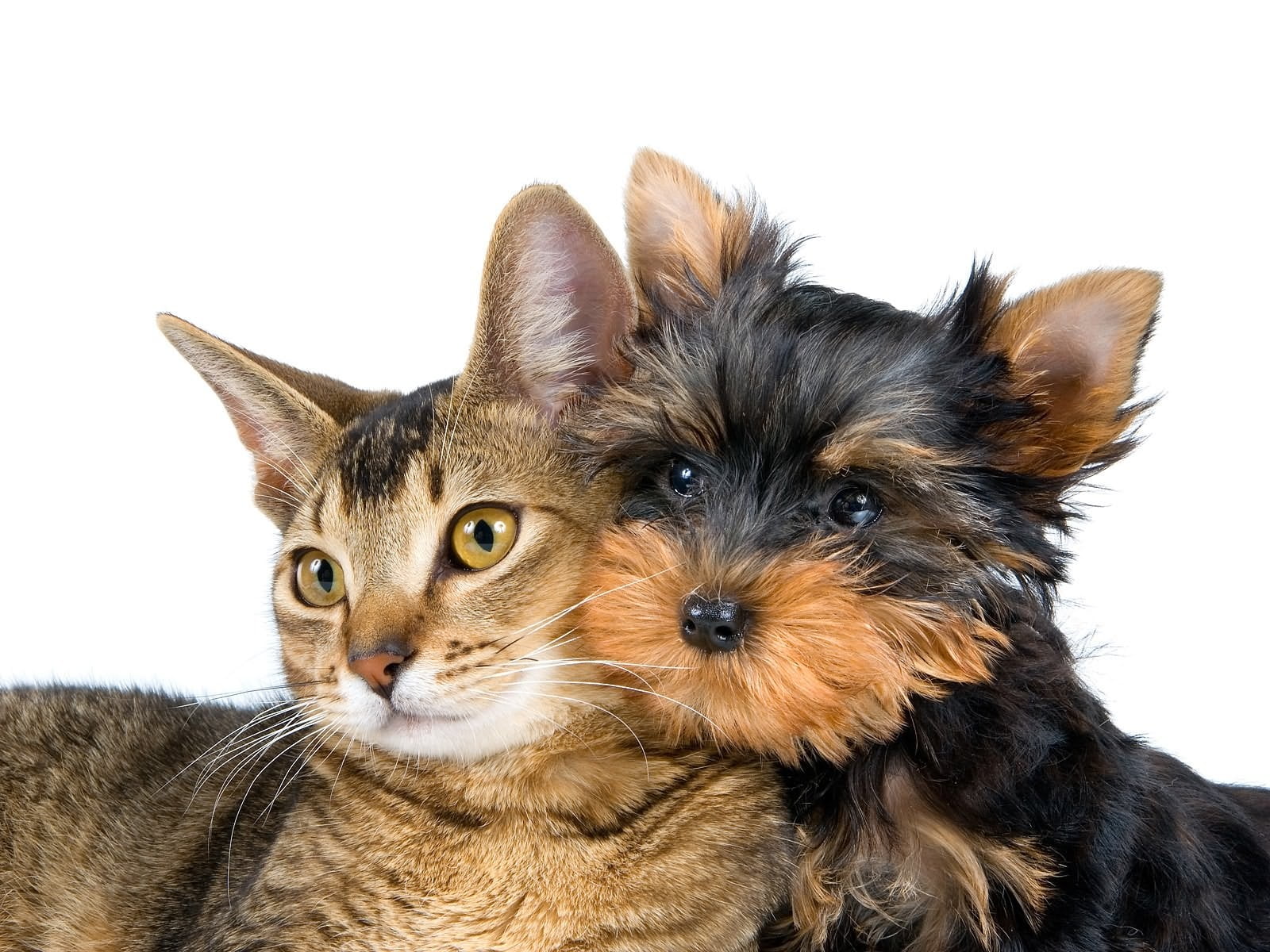 Do yorkies get along with cats?

Do Yorkies get along with cats?

If you’re thinking of raising Yorkshire terrier and cat together then you probably are wondering if they can get along well or will they end up fighting each other to death. Will the Yorkie be too aggressive towards the cat or will it cuddle with it? Will the cat constantly bother the Yorkie or will the Yorkie chase it instead? Everyone has mixed opinions about these questions. A lot of people complain that it is impossible for them to get along while the other half of people disagree and say that they can be wonderful pals. So, do yorkies get along with cats?

If the Yorkie is well trained and disciplined then it shouldn’t be a problem for it to get along with your cat. However, if it is demanding and is used to being frequently pampered by everyone then this can prove to be a very difficult task. If you introduce each other when they are young, chances that they get along increases.

My yorkie and cat get along very well. In fact, they are so chummy that I don’t think either of them can function without the other. The Yorkie looks after the cat and feels responsible for it. It acts very protective towards it as soon as it senses the presence of an unknown person.  They always play together and have frequent ‘let’s chase each other around the house and destroy everything in the process’ session. Sure they do fight many times but it’s just like the fights you have with your siblings, nothing serious that needs attention. I’ve noticed that even among my friends, their Yorkies and cats get along very well but again there are exceptions for everything.

However, my Yorkie does not get along with other dogs that are way bigger than he is.

Do Yorkies get along with other pets? 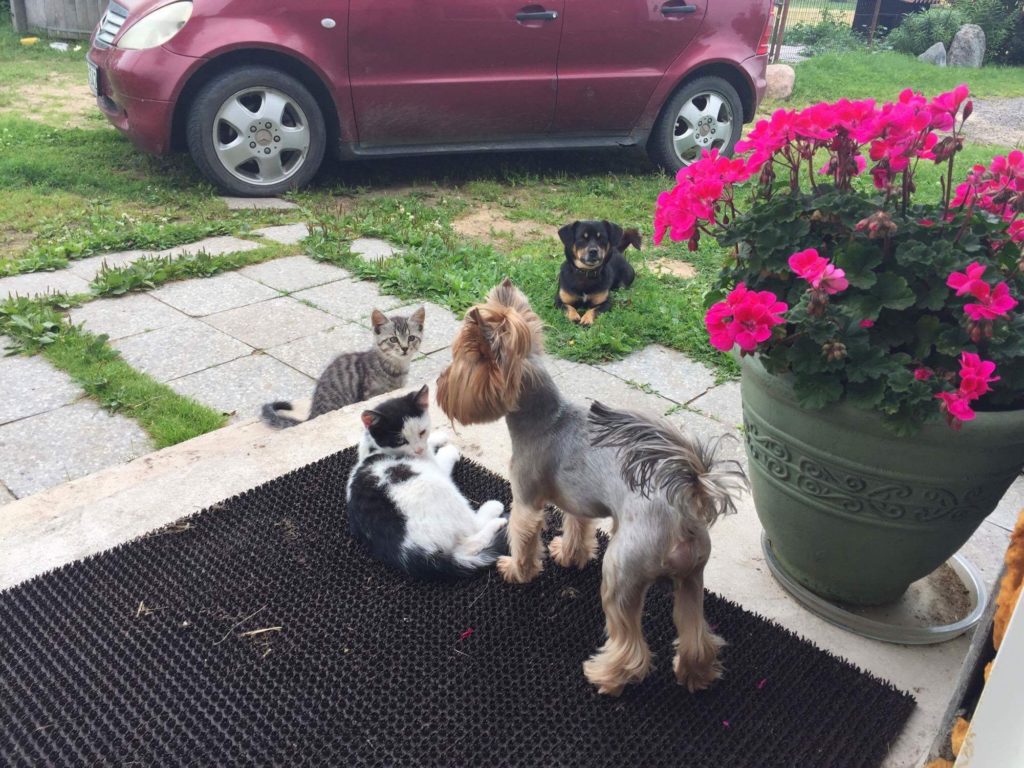 Depending on how you raise them, Yorkies may or may not get along with other pets. Initially, it takes them a time for them to warm up to other pets but later on, they get along just fine. Yorkies are very smart, so if you get a big dog they will instantly realize that they can’t overpower them and in turn start respecting the dog. However, Yorkies should never be kept unsupervised in a room with smaller animals like rabbits or birds. In fact, you should never raise small animals if you own a Yorkie since they have a hunting nature and will hunt down anything that looks like a prey. Yorkies also get jealous very quickly if they don’t get enough attention and hence compete with other pets for the spot light. Being an owner of a Yorkie and a cat, the question I’ve been asked the most is ‘Do Yorkies get along with cats?‘

Things you need to know about Yorkies and cats

Tips for raising a Yorkie and a cat

It’s a good idea to find out different methods to ensure that both of them get along well before you decide to raise them under the same roof.

Observe the behavior of both the pets individually for at least 1 week to find out their behavior patterns; whether they are aggressive or friendly. If they are the kind that can live in harmony with other pets then there are fewer chances of them starting a world war III in the house.

Since puppies and kittens get along very well, this is the best method to raise both of them without worrying about the house turning into a pet war zone. This will ensure that both of them grow up accustomed to each other and prevent extreme fights between them.

It is not a good idea to suddenly bring in a cat and force your Yorkie to get along with it. This will only result in hostile behavior towards each other. Never leave both of them unsupervised in the initial days as they’re constantly walking on eggshells in the presence of each other. You can first start with letting both of them sniff each other’s scents, and then slowly bring them close to each other.

It is also very important that you separate all of their belongings like food bowls and bed. This can prevent them from fighting each other repeatedly for food or a good sleeping spot. Animals also consider others a threat when it comes to litter boxes so it’s advisable to allot different ones to them. Yorkshire terriers and cats are both very territorial so its best that you prevent any fights that are sparked due to invasion of personal spaces.

The key to raising both of them without any problems is to give them both equal attention so that they don’t feel threatened by each other.

It is very important that you train both of them to part when they start fighting. Separating them for a short period of time can cool them down but this is just a temporary method. If your Yorkshire terrier and cat continue to fight vigorously even after 2-3 weeks then that’s a clear sign that they are never going to get along well and you need to separate them immediately.

In majority of the cases Yorkies and cats do get along very well but in some instances they just don’t bond with each other. When this happens it’s best you find a new home for one of them. If you continue to force them to get along with each other then it will only result in increased number of fights and severe injuries.

Yorkie Bad Breath: Everything You Need to Know

Camping with a Yorkie: everything you need to know

How to stop Yorkie from barking? Tips from dog trainer!

Yorkie Potty Training is Easy! Try it Yourself

CBD Oil For Yorkies: Benefits, Side Effects and Dosage

When Can Yorkies Leave Their Mothers?

Interesting Yorkie Facts That You Have Never Heard

Yorkie Separation Anxiety: How to Notice it?